Thank you to all of our clients, supporters,
and our great team of EMS responders.

Wishing you all the best in the New Year!

Most cultures use storytelling or “lessons learned” as a teaching opportunity for passing on information gained from experience that is usually intended to keep the learner out of harm’s way. “This is what you never want to do and I am going to tell you why….many years ago, when I was a young …” A good story teller can stir our emotions and activate our senses, creating a lasting memory.

One of the most memorable lessons I experienced early in my career was during a 40 hour Hazardous Waste Operations and Emergency Response (HAZWOPER) course instructed by a paramedic/firefighter. He shared his personal story of being a first responder to a crime scene, coming home after the event and taking off his blood soaked boots at the front door. Shortly afterwards, he noticed his young child sitting on the floor with his boot in hand inches away from his mouth. Fortunately, he was able to remove the boot in time before the child put his mouth to the blood soaked leather. His lesson on the importance of proper decontamination protocol still resonates with me today. If he would have said “be sure to doff and bag your gear”, it would not have had near the impact. Through his story, he helped me to feel the horror of what could have happened to that child by not using proper decontamination control measures.

In the maritime industry, sea stories, either shared during a “safety moment”, “back aft conversation”, or training session, are very powerful and impactful when communicating and transferring important information. As most of you are aware, the National Transportation Safety Board (NTSB) recently released their annual report of compiled accident investigations entitled, “Safer Seas 2014: Lessons Learned from Marine Accident Investigations”.  Part of NTSB’s mission is to determine the probable cause of accidents and issue safety recommendations aimed at preventing future accidents. In Chairman Hart’s “Message from the NTSB Chairman”, he states the following about Safer Seas, “It represents our continuing commitment to sharing the lessons that we learn through our investigations.

A great number of marine accidents can be prevented when crews know and respond to safety issues early and when crews work together effectively in the event of a crisis.”In the 2014 version, a summary of safety issues is provided from the NTSB’s investigations to help encourage the sharing of these lessons learned. Below is a snapshot of some of these real sea stories shared.

At least 1 crewmember died and the vessel sank – probable cause was a severe heel to port, followed by immediate down flooding; unfortunately, the reason why the vessel loss stability could not be determined.

2 fatalities, 3 serious injuries and the vessel sank – probable cause was inadequate decision making and safety oversight.54 million in damages in vessel/dam allision – probable cause was proceeding with the passage during significant risk and probable contributing factor was lack of effective communication between the captain and lockmaster.

By embracing sea stories as a valuable training technique it will not only motivate the learner, and enhance retention of information, but hopefully ensure “Safer Seas” as the NTSB has intended through their annual report. Do you have lessons learned to share? Please share here.This entry has been created for information and planning purposes. It is not intended to be, nor should it be substituted for, legal advice, which turns on specific facts.

Heart Surgeon For a Day

Thomas scrubbed in as a Doc For a Day!

The event was live-tweeted by @Swedish, using the hashtag #SwedishDoc4Day.

Dr. Glenn Barnhart and the team at the Swedish Heart & Vascular Institute in Seattle invited 15 members of the public (including students) to become a “Heart Surgeons for a Day”!

Randomly selected individuals spent time learning about the heart and its key parts. These individuals got to see how Swedish surgeons are using the latest technology to prevent, diagnose, and treat heart disease.

As part of the event, participants:

“Heart Surgeon for a Day” Tentative Schedule of Events:

9:30 AM: Scrub up with your new pair of medical scrubs
9:45AM: Breakfast and meet and greet with other participants and physicians
10 AM: Welcome
10:10 AM: Watch part of a heart surgery and prepare for hands-on demonstrations and exercises
10:30: Take part in an interactive session with all the tools and technology of cardiac surgery, including the opportunity to see a human heart.
11:30 AM: Guided behind-the-scenes tour
12:15 PM: Lunch and Q&A session
12:45-1:00 PM: Event conclusion, with additional time for hands-on demonstrations

Needless to say it was an experience Thomas will never forget; incredible!

What is all the excitement about?

While some cardiac events are treatable with effective Cardiopulmonary Resuscitation (CPR) alone, others require a combination of effective CPR and the use of an automated external defibrillator (AED) to deliver a lifesaving shock within the first few minutes of sudden cardiac arrest (SCA). In both cases, effective CPR contributes to an increase of survival rates of up to 75%.

More than a simple AED, the HeartSine samaritan® PAD 450P with integrated CPR Rate Advisor™ provides real-time visible and audible feedback to the rescuer on the rate of chest compressions during an SCA resuscitation.

While some SCA victims benefit from the delivery of a shock, effective CPR with minimum interruption will maximize the chances of a positive outcome for virtually every SCA victim.  Using HeartSine’s proprietary ICG-based technology, the SAM 450P with CPR Rate Advisor provides the rescuer with continuous real-time verbal prompts of “Push faster,” “Push slower,” or “Good speed” to help achieve the optimum rate of compressions as defined by the American Heart Association (AHA) guidelines for CPR. Similarly, the SAM 450P detects if CPR has stopped, and prompts the rescuer to “Begin CPR” until CPR has resumed.

Watch this video to learn more about our revolutionary CPR Rate Advisor technology:

Twenty-five people take turns to perform CPR for one and a half hours (1.5) hours to keep a man who collapsed after a heart attack alive.

Don’t give up too soon!

I have often shared this incredible story in my classes of a community that just would not give up on one of their own. Because of their efforts, a man who suffered a massive heart attack is alive and well today after being kept alive for an incredible 1.5 hours (90 minutes) by passers-by who took turns to perform CPR.

Never Give Up! Unless you have reached the final “5”!

Howard Snitzer, 54, collapsed in the street when he suffered a potentially fatal cardiac arrest on his way to collect groceries. With a population of just 800 people and not a single traffic light in the town, his chances of survival looked bleak, but Snitzer was miraculously kept alive by dozens of good Samaritans who pumped his heart as he lay lifeless on the ground.

The chef has now made an almost full recovery and is relaxing at his home in the back-water town of Goodhue, Minnesota. He said: ‘I love them. I love those people. What can I say? It’s pretty overwhelming to be in a room full of people that are not going to walk away and give up on you.’ And I had nothing to do with it. It’s just one of those things. They’re all angles as far as I’m concerned. ‘I don’t remember going (for groceries), I don’t remember getting out of the car, and I don’t remember blacking out.’

Al Lodermeier, who owns the garage just across the street from where Snitzer collapsed, was one of the first people to start CPR.

He alerted his brother Roy who was joined by another passer-by who witnessed the moment Sitzer collapsed, Candace Koehn.

The Lodermeier brothers were both veteran first responders with more than three decades of experience on the volunteer Goodhue Fire Department and grabbed the rescue truck for its first aid kit. Koehn had also been trained in CPR. Other rescuers joined including police, volunteer fire fighters and rescue squads from the neighbouring towns of Zumbrota and Red Wing.

The Mayo Clinic’s emergency helicopter, Mayo One, flew in from Rochester, Minnesota from almost 35 miles away.

Their teamwork kept blood flowing to Snitzer’s brain, making each rescuer a surrogate for his failing heart.

He added: ‘The brain survives, at best, five or six minutes when the blood flow stops.’

It is estimated that across the U.S. only five percent of those who who suffer cardiac arrest on the street are resuscitated and live.

Other rescuers joined including police, volunteer fire fighters and rescue squads from the neighbouring towns of Zumbrota and Red Wing.

Even cities with the best records of responding to out-of-hospital cardiac arrests are said to save fewer than half of all victims or just 45 percent at best if the cardiac arrest is witnessed by a bystander.

‘I don’t think the story’s about me,’ Snitzer told USA Today. ‘It’s about the guys in Goodhue and Mayo One.

‘My end of this bargain is to honour the guys who did this for me.’

During the emergency, first responders shocked Snitzer a dozen times to jolt his heart out of its abnormal rhythm, or ventricular fibrillation.

The Mayo One helicopter crew landed and  found a line of first responders taking turns pumping on Snitzer’s chest. Al Lodermeier was at Snitzer’s head, squeezing air into a mask over his mouth using a device called an ambu bag.

Doctors feared that Snitzer might have suffered a blood clot and suffer brain damage but has now been released from hospital after 10 days and is on course to make a full recovery.

‘The number one thing in this case was that someone recognized very quickly that he had arrested and began good, hard, fast CPR,’ said Mayo One paramedic Bruce Goodman who arrived shortly after Snitzer collapsed.

‘If you’d told me that night that this guy was going to get up and walk out of the hospital I would probably have said, ”I’ll bet my house against yours he won’t ”.’

The Red Cross has been the go-to source for more than a century for information, skills and confidence to act in an emergency, at home, in school and in the workplace. 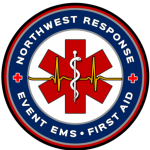